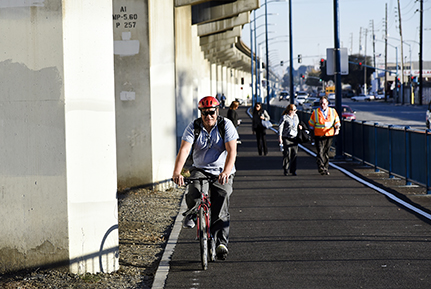 The East Bay Greenway is a proposed regional trail which would link BART stations throughout the inner East Bay. Alameda CTC is the project sponsor for the East Bay Greenway: Lake Merritt BART to South Hayward BART Project (Project). The Project proposes to construct a bicycle and pedestrian facility that will generally follow the BART alignment for a distance of 16 miles and traverse the cities of Oakland, San Leandro, and Hayward as well as the unincorporated communities of Ashland and Cherryland. The Project will connect seven BART stations as well as downtown areas, schools, and other major destinations. Implementation of the East Bay Greenway from Lake Merritt to South Hayward is being pursued in two phases:

Within Oakland, the East Bay Greenway Multimodal Project will span 8 miles and connect the Downtown, Eastlake, San Antonio, Fruitvale, Coliseum, Elmhurst, and Stonehurst areas. The East Bay Greenway will generally run via East 10th, East 8th, East 12th, and San Leandro Streets and will incorporate the previously completed segment of the Project from 75th to 85th Avenues, and Oakland’s East 12th Street Bikeway and Seminary to 69th projects. To provide input on the project, email us at EBGWinfo@alamedactc.org.

East Bay Greenway improvements will include a variety of elements designed to improve overall safety, create comfortable facilities for cyclists and pedestrians of all ages and abilities, and enhance the overall streetscape. Project features will include shared use paths, separated bikeways, protected intersections, enhanced crosswalks with flashing beacons and pedestrian signals, ADA curb ramp and lighting upgrades, and street beautification/greening features.

Current Phase 1 Engagement Activities in Oakland Alameda CTC and its partners are reaching out to communities along the corridor to inform them of the project and get feedback on the proposal. The following events are currently being planned: Alameda CTC is also sending informational postcards to residents and businesses along the corridor.

On June 21, 2022 the San Leandro City Council adopted a resolution supporting the East Bay Greenway Multimodal Concept Plan within the City of San Leandro. Please see links below to view the Concept Plan and outreach materials from community engagement in spring/summer 2022. Design of the San Leandro segment will take place in 2023. Alameda CTC is actively pursuing grants for construction.

The project team will be conducting community outreach and developing a Concept Plan for the East Bay Greenway in Ashland/Cherryland in fall 2022.

This section will be updated as project documents are developed.

The project team will be conducting community outreach and developing a Concept Plan for the East Bay Greenway in Hayward in fall 2022.

This section will be updated as project documents are developed.

A longer-term East Bay Greenway Urban Trail (Phase 2) would construct an off-street regional trail facility in the BART corridor connecting between Fruitvale BART and South Hayward BART, a distance of approximately 13-miles. Phase 2 generally provides the same biking and walking connections as Phase 1, but offers the potential for a linear-park style facility with separate bridges at major street crossings, recreation amenities, and wider, more separated trail facility. Alameda CTC studied and environmentally cleared Phase 2 from 2016-2018. Phase 2 is being pursued on a longer timeframe due to the high-cost and need to acquire right-of-way from Union Pacific Railroad. Alameda CTC studied two design options as part of prior environmental documents. A rail-to-trail option assumes the abandonment and acquisition of the entire Union Pacific Oakland Subdivision north of Industrial Parkway in Hayward. A rail-with-trail option assumes that the Oakland Subdivision remains an active rail line and right-of-way is acquired to construct a trail in a shared rail-trail corridor. Both options would require Union Pacific to agree to provide necessary ROW and local jurisdictions to agree to own and maintain the facility.