What is the East 14th Street/Mission Boulevard Multimodal Corridor project?

The East 14th Street/Mission Boulevard is an 8-mile arterial corridor that serves local and regional travel and traverses the City of San Leandro, unincorporated Alameda County, and the City of Hayward in Central Alameda County. Alameda CTC has worked with local jurisdictions to develop a vision and plan for making the corridor safer and more multimodal, and in spring 2021, the Alameda CTC Commission approved actions to advance near-term implementation of transit, pedestrian, and bike infrastructure improvements and coordinated placemaking features between the San Leandro BART Station and the South Hayward BART Station including  roadways connecting to the BART stations along this segment. The near-term recommendations (3-5 years, pending funding) of the East 14th Street/Mission Boulevard Multimodal Corridor project are being implemented in combination with the East Bay Greenway Phase 1 project. The East Bay Greenway is a proposed regional trail that would link BART stations. Alameda CTC is the implementing agency for the 16-mile portion of the East Bay Greenway from Oakland to Hayward and is developing a Phase 1 of the project that provides an interjurisdictional, “all ages and abilities” active transportation facility connecting via City streets. Pending funding for construction, Alameda CTC seeks to implement regional bikeway, pedestrian safety, and transit speed and passenger comfort improvements within 3-5 years. The East 14th Street/Mission Boulevard Multimodal Corridor project is a subset of the 30-mile East 14th Street/Mission Boulevard and Fremont Boulevard Multimodal Corridor project, a long-term vision approved by the Commission in July 2020. For more information and project status, see Project History tab. 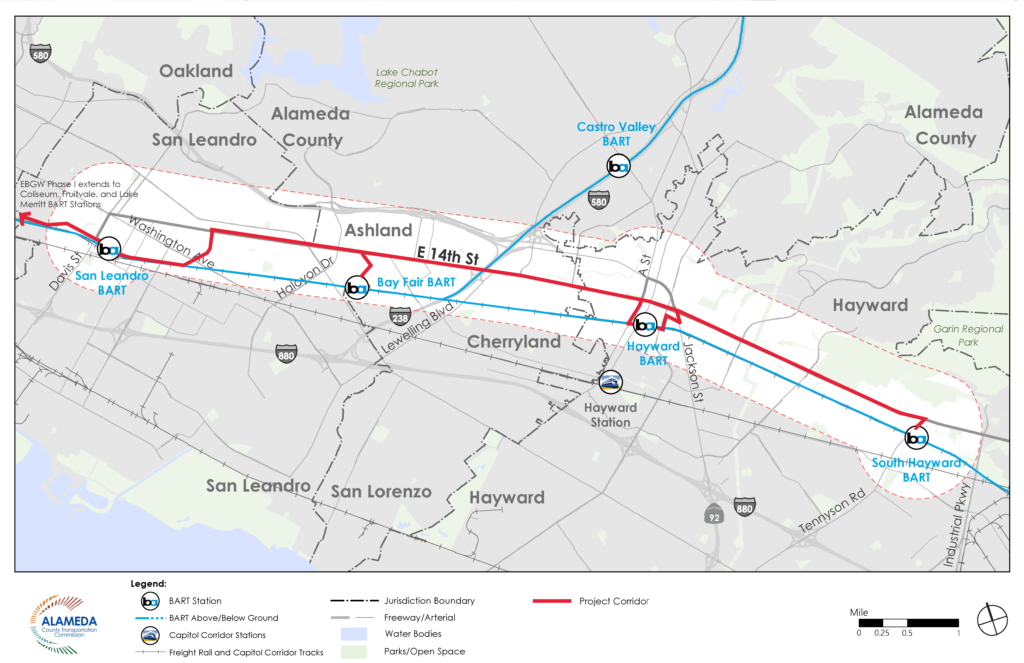 What led to the improvements being proposed?

Between 2018 and 2020, the E14th St /Mission and Fremont Blvd Corridor Project conducted baseline data collection, analysis, and community engagement to establish a long-term vision for the corridor. Through public outreach, we learned that residents of the area were concerned about vehicular speeding and safety. They also showed strong support for bicycle and pedestrian projects and transit service improvements that increase service reliability as well as the extension of the Bus Rapid Transit (BRT) to the South Hayward BART station. To deliver the near-term project, Alameda CTC is actively engaging with partner agencies which include San Leandro, Alameda County, Hayward, AC Transit, BART, and Caltrans in the development of conceptual improvements, environmental clearance, construction plans and engineering to deliver the project in 3-5 years, depending on funding.
Project Fact Sheet (Winter 2022)
Alameda CTC is conducting public outreach for the East Bay Greenway (EBGW) Phase I: E14 St/Mission Blvd Multimodal Corridor project to collect feedback on project advancement tasks that include conceptual designs for bike, pedestrian, rapid bus improvements and environmental clearance. The following events are scheduled: Alameda CTC conducted door-to-door outreach to business owners along East 14th Street in San Leandro during March to understand parking and loading needs, and other improvements that could better serve project area businesses. In subsequent months, look for popups and focus groups. Check out our Facebook page and send us a comment! 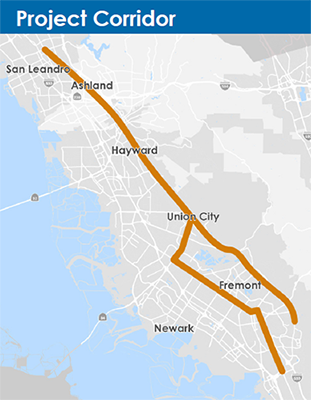 Phase I of the East 14th Street/Mission Boulevard and Fremont Boulevard Corridor Project was completed between 2018 and 2020 and developed a long-term vision for this important interjurisdictional arterial corridor that passes through Central and Southern Alameda County (unincorporated Alameda County and the cities of San Leandro, Hayward, Union City and Fremont). The corridor provides key north-south connections throughout the inner East Bay paralleling Interstate 880 (I-880), while connecting with two major east-west bay crossing bridges (San Mateo and Dumbarton bridges) and major commute corridors to the Tri-Valley, including Niles Canyon (State Route 84) and Sunol Grade (Interstate 680). It is one of a limited number of north-south travel options in the central part of Alameda County serving local, regional and interregional trips. Significant land development and growth is occurring and planned for all along this corridor. This project built off existing planning and improvement efforts, conducted a detailed analysis of multimodal mobility within the corridor, and identified specific implementable short-, medium- and long-term improvements to advance them to project delivery. Currently, the cities of Union City and Fremont are advancing projects that align with the long-term vision of the E14th St. Mission and Fremont Blvd Corridor, such as the Fremont Blvd Safe and Smart Corridor  and the Decoto Complete Streets Project in Union City and Fremont.

Prior public outreach for the E.14th Street/Mission and Fremont Boulevards Corridor project was conducted from spring 2018 through fall 2019 and included a variety of instruments and venues to inform the public and gather input. Feedback obtained from this public outreach helped define the long-term vision for this project. The following is a list of public outreach events: