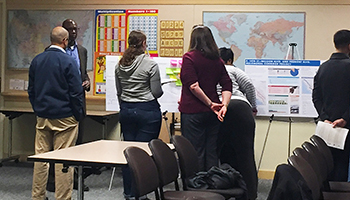 Throughout this year, Alameda CTC has held various public meetings to discuss and gather input on multimodal projects as a key step in advancing project development. Some of these projects include early development on:

On January 15, Alameda CTC, in partnership with the California Department of Transportation (Caltrans), held a public meeting for the I-80/Gilman project – a four-lane arterial roadway (Gilman Street) with two lanes in the east-west direction that are intersected with four I-80 on- and off-ramps. A key discussion point was the release of the draft environmental document, which is a significant milestone for any transportation construction project. Additionally, the project team presented on the potential design elements and benefits to the public, such as roundabouts, a pedestrian/bicycle overcrossing and bicycle facilities. The environmental document was certified in June 2019, and the project is now in the design phase with construction expected to begin in late 2020.

On January 23, Alameda CTC participated in the first of a number of “pop-up” events to seek early public input for the I-880/Whipple project located in the City of Hayward at the Whipple Road/Industrial Parkway Southwest and Industrial Parkway interchanges on I-880, where the proposed project will implement interchange improvements, including a northbound off-ramp, a southbound HOV bypass lane on the southbound loop off-ramp, bridge reconstruction over I-880, and surface street improvements and realignment. Visit the project web page for additional details.

On May 22, Caltrans, in partnership with Alameda CTC, held its first open house for the I-80/Ashby Avenue (SR-13) Interchange Improvement project to inform the public about improvements being planned for this interchange and to seek input. Community members, elected officials, business owners/employees and others who frequent this busy interchange participated in the meeting, providing important input during the early development phase of this project. Visit the project web page for more information.

Alameda CTC has projects in construction and more scheduled to begin this year, fulfilling our promise of delivering safety and operational improvements throughout the county.

Two projects currently under construction are Phase 2 of the I-680 Sunol Express Lanes and I-880 North Safety and Operational Improvements at 23rd and 29th Avenues. The I-680 Sunol Express Lanes project is a high-occupancy vehicle/express lane on northbound I-680 from State Route 262 (SR-262)/Auto Mall Parkway in Fremont to north of State Route 84 (SR-84). This project adds a new 9-mile northbound express lane supported with state-of-the-art technology to reduce congestion in one of the most congested corridors in the Bay Area. Construction is anticipated to continue through late 2020.

The I-880 North Safety and Operational Improvements at 23rd and 29th Avenues project addresses a critical bottleneck and low vertical clearances on I-880 between the 23rd and 29th Avenues interchanges. Replacement of overcrossing structures, both of which are now open, widen I-880, reduce merging conflicts, increase safety and operations on the freeway as well as on local arterials, and improve pedestrian and bicycle facilities. Construction is expected to come to a close this year.

Lastly, the GoPort Freight Intelligent Transportation System (FITS) looks to improve safety, reduce traffic congestion, provide travel reliability, reduce travel time and improve quality of life by improving traffic management and operation of arterial streets, and sharing realtime traveler information to the truckers and other travelers through the use of new and proven information technologies in and near the Port of Oakland. Construction on this portion of the GoPort Program is anticipated to begin this year and continue through late 2021.