The East Bay Greenway Project, a 1/2 mile Class 1 Bike/Ped path from Coliseum BART to 85th Ave in Oakland is the first segment of the planned 12-mile mixed use path connecting schools, business, community centers and transit. 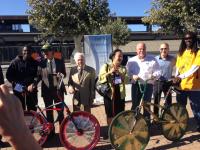 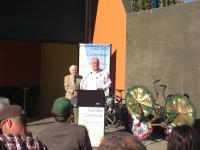 This half-mile link, from the Coliseum/Oakland Airport BART Station to 85th Avenue in Oakland, is the initial phase of a planned 12-mile bicycle and pedestrian pathway running roughly parallel to the BART tracks through Oakland, San Leandro, Hayward and unincorporated Alameda County.

The East Bay Greenway project is designed to improve critical pedestrian and bicycle access to intermodal transit hubs and BART, and ultimately providing a safe, accessible pedestrian and bicycle trail to encourage use of alternate modes of transportation. By linking together many smaller parks, schoolyards, bike trails, and community destinations, the East Bay Greenway will create new opportunities for recreation, public health, sustainability, and community pride.

This section of the East Bay Greenway is funded by a US DOT TIGER II Grant, EBRPDâ€™s Measure WW and Alameda CTCâ€™s Measure B. Read the project fact sheet here.