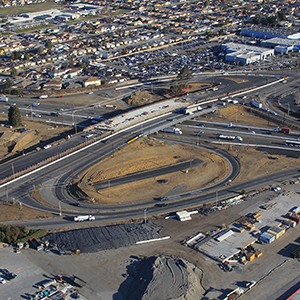 In August 2020, work began on the Interstate 880 (I-880) Replacement Planting at Davis Street and Marina Boulevard landscaping project. This $3.2 million project is the final leg of the I-880 Southbound High Occupancy Vehicle (HOV) Lane – South Segment project, an Alameda County Transportation Commission (Alameda CTC) project that was delivered in partnership with the California Department of Transportation (Caltrans), providing improvements in the City of San Leandro along the I-880 mainline from Hegenberger Road to Marina Boulevard. When the South Segment project opened to the public, the work to replace highway planting remained to be completed.

Work on the I-880 Replacement Planting at Davis Street and Marina Boulevard project was done on all four sides of each interchange and on I-880 within those interchanges. The City of San Leandro takes pride in this beautification project that includes installation of irrigation systems, landscaping, bridge railings, end corbels and decorative slope paving. Alameda CTC Chair Pauline Cutter says, “As Mayor of San Leandro and Chair of Alameda CTC, I am happy about our involvement in this project. I have a long-term commitment to sustainability, and the work on this project moves the sustainability needle forward with noise reduction, erosion mitigation and air quality improvement. Also, I am pleased with the creative aspect of this project – the beautiful decorative artwork on the concrete embankments along the highway and the bridge railings and end corbels emblazed with the City’s logo.”

This project is funded by the City of San Leandro and Alameda CTC-administered funds. Full project completion will be in 2024 after a three-year plant establishment period.