Currently draft recommendations are being developed for long-term (2040) multimodal improvements after extensive data analysis, input from stakeholder agencies and five recent public workshops along the study corridor for community members.

Draft recommendations are currently being developed for long-term (2040) multimodal improvements along the East 14th Street/Mission and Fremont Boulevard Multimodal Corridor, which build on existing and planned efforts in the study area. These recommendations are the outcome of extensive data analysis, stakeholder agencies and community input.

Draft transit recommendations include a combination of bus-only lanes between San Leandro BART and South Hayward BART, and the use of Rapid Buses from South Hayward BART to the Warm Springs BART Station in the City of Fremont.

Draft recommendations for bicycle improvements include Class I bike facilities along the BART and Union Pacific Railroad alignment, as feasible, and on-street Class IV bike facilities throughout the corridor.

And the project also includes mobility hubs to facilitate:

It is anticipated that the current scoping phase of the project will conclude in spring 2020. Project initiation and the environmental phase will begin in summer 2020. 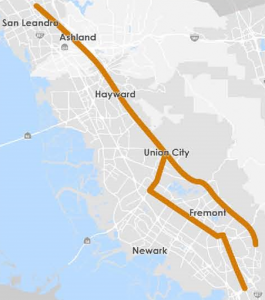