Measure BB funds the 2014 Transportation Expenditure Plan (2014 Plan), which was unanimously approved by the Alameda County Transportation Commission at its January 2014 meeting. An economic analysis by the Bay Area Council Economic Institute reports that the Plan will yield $20 billion in total economic activity in the Bay Area and 150,000 full-time equivalent jobs.

The 2014 Expenditure Plan will: 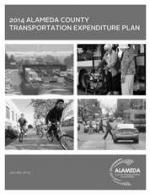 Strict accountability and performance measures ensure delivery. The 30-year Plan includes strict accountability measures to ensure all $8 billion for County transportation improvements are spent on approved projects. It requires open and transparent public processes to allocate funds, annual independent audits, an independent watchdog committee made up of people who live in Alameda County and annual compliance reports distributed to the public that detail costs and how specific performance measures are met.

Alameda CTC sought and received unanimous approval of the 2014 Transportation Expenditure Plan by each of Alameda County’s 14 cities, and by the County Board of Supervisors. View the calendar of these meetings.

2014 Plan Informational Postcards
Click here to download a PDF of the general 2014 TEP educational postcard in English. Spanish and Chinese versions of these postcards are below.