Commuters are benefiting: less congestion, greater reliability and expanded choices in the I-580 Express Lanes

Alameda CTC marked the one-year anniversary of the opening of the I-580 Express Lanes with the release ofÂ data charting the performance of the new lanes. 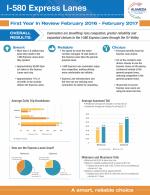 Since the new lanes opened in February 2016, more than 7.6 million trips have been made, with an average of approximately 30,000 trips per day. The speed to travel the entire corridor averaged 10 mph faster in the Express Lanes than the general purpose lanes, and commuters enjoy less congestion and greater reliability on the corridor.

Approximately 11 percent of the traffic in the corridor uses the Express Lanes. Thirty-eight percent of express lane trips are toll-free (taken by carpools and HOV-eligible vehicles with a FasTrak FlexÂ® toll tag set to 2 or 3+). Solo drivers pay a toll to use the lanes with any FasTrakÂ® toll tag.

Listen to the KCBS report.